Terminal buffers are a built-in feature of Neovim. This means that terminals can be launched inside Neovim just like any other buffer, may it be a split window, a new tab or an independent buffer. Why is this so useful? Be prepared to be amazed. 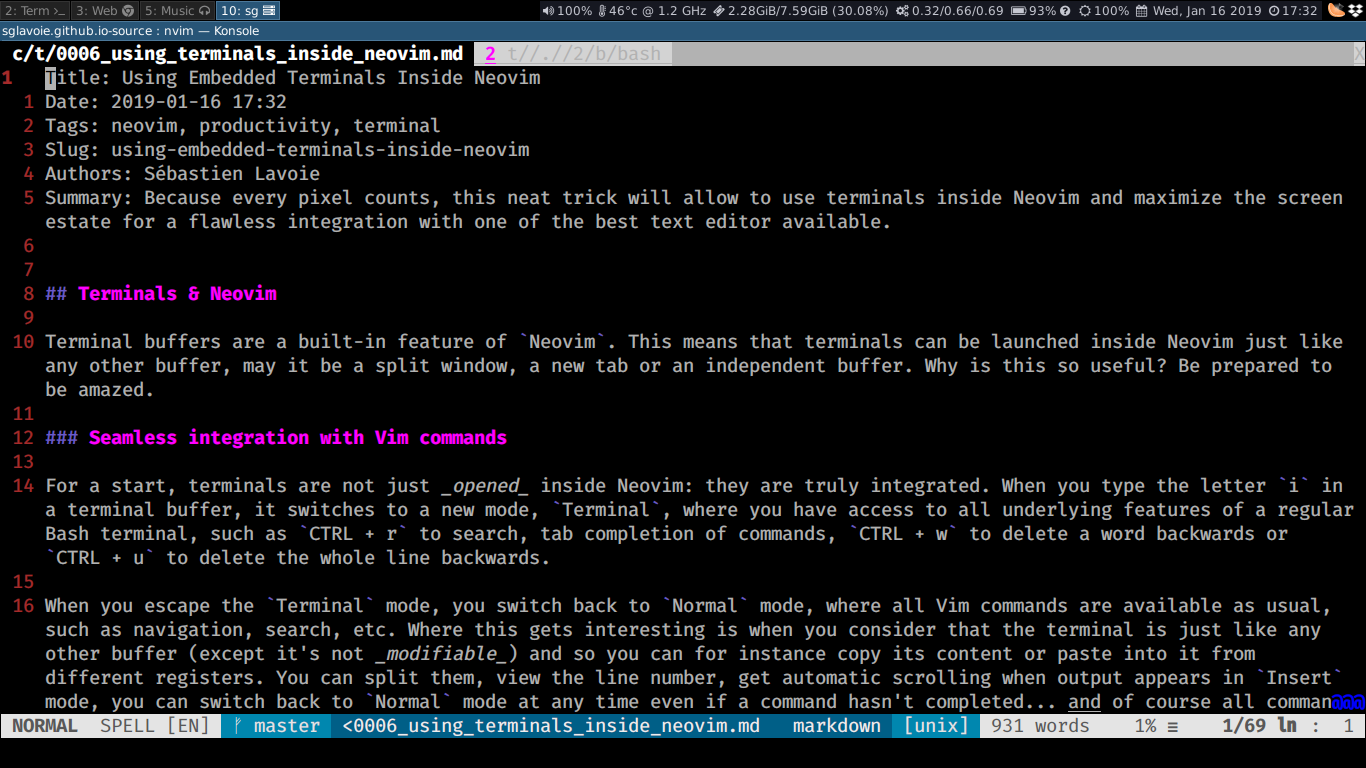 For a start, terminals are not just opened inside Neovim: they are truly integrated. When you type the letter i in a terminal buffer, it switches to a new mode, Terminal, where you have access to all underlying features of a regular Bash terminal, such as CTRL + r to search, tab completion of commands, CTRL + w to delete a word backwards or CTRL + u to delete the whole line backwards.

When you escape the Terminal mode, you switch back to Normal mode, where all Vim commands are available as usual, such as navigation, search, etc. Where this gets interesting is when you consider that the terminal is just like any other buffer (except it’s not modifiable) and so you can for instance copy its content or paste into it from different registers. You can split them, view the line number, get automatic scrolling when output appears in Insert mode, you can switch back to Normal mode at any time even if a command hasn’t completed… and of course all commands like gt to go to another tab work as always.

Terminals get supercharged with the power of Vim

This is getting exciting (at least for me). Now, having a terminal with more power is useful in many cases:

The workflow is more compact and centralized

Because the terminals are running with one Neovim instance, you get everything in the same place, which is usually how you need to access your work anyway. If for some reasons you need to have multiple instances of Neovim running, this is possible too and in that situation you could simply split them into different workspaces.

Because everything is launched with Neovim, every terminal left open will also be exited when you close Neovim, shutting down any server or quitting any background interaction going on in the terminals. I have found that this behaviour is what I expect pretty much all the time because the idea of having a terminal inside a working session of Neovim is to work on something related, so it makes sense to close everything that’s to do with a single project or task when you exit the text editor. No need for CTRL + d or exit anymore!

I don’t use many settings or mappings related to terminals, but I guess the nicest one is to remap the Escape key because by default, this is a weird mapping that leads to twisted fingers (<C-\><C-n>). Here is what I currently have in my init.vim file (the equivalent of .vimrc for Neovim):

This was a quick overview of a feature that I have neglected for some time but recently realized how well it integrates with my workflow. You can find some more information by typing :h terminal. If you already use Neovim, it’s worth giving it a try! Otherwise, it’s worth giving Neovim a try.