Using i3 as a Window Manager for Increased Productivity

i3 is a tiling window manager. To get to know i3 better, it’s good to situate what desktop environments are in the first place.

What are desktop environments?

If you are familiar with Linux, you certainly know about desktop environments such as GNOME, KDE, Xfce… and actually many more are available (you can see this article on Wikipedia for an extended selection)! The classic Graphical User Interface (GUI) on Windows XP was known as Luna and is now called Modern on Windows 10. Aqua is the name of the GUI on macOS. Well, every desktop environment comes with a window manager, the main component that makes interactions with windows possible, like moving, resizing, minimizing or closing them.

Desktop environments are very useful in many ways:

Even though desktop environments are user-friendly and include many goodies, they do have several disadvantages that make window managers great alternatives.

Desktop environments are often bloated with many applications that you may not need but that are nevertheless occupying system resources as they have many dependencies. For example, if you use Thunderbird for managing your emails and your desktop environment is GNOME, try to remove Evolution, the default application for emails that comes with it… It’s still relatively easy to disable its processes, but you sometimes have to configure files manually to satisfy your need for removing clutter.

Other than coming with a set of default applications (more disk space), the whole environment occupies a lot more memory to run smoothly. On my modest laptop, I was still experiencing speed issues because the system was occupying too much RAM when opening heavy applications (lots of tabs when web browsing, photo editing, loading IDEs like PyCharm for programming, etc.) and I had 4 GB of RAM installed at the time. KDE requires at least 600 MB, same is true for GNOME in most recent versions (but used to be over 1 GB not very long ago, just like for KDE). Windows, for example, requires more than 1.5 GB of RAM to operate with basic features. i3 needs less than ~15 MB with as many windows and spaces open as you would ever want. Since there are much less processes to take care of, CPU consumption is also lower, which is more noticeable on older machines.

There are obviously ways to go about using keyboard shortcuts for pretty much anything you want with desktop environments. However, window managers and especially i3 make this a must, as there is really no reason to use a mouse for moving windows.

First of all, windows are “stuck” in place and never overlap by default. You can’t move them around with a mouse unless they are “floating” windows, which means you can separate them to move them around freely like in most desktop environments. The whole point of using a window manager like i3 is to maximize screen space, so every window opens in full screen. Honestly, the only time I ever found the need to use a floating window with i3 is when using the operating system Windows in a virtual environment when connecting through RDP with Google Chrome on Google Cloud Platform (that is, not very often). Other than that, I find it very practical to split the screen with no overlapping windows, even with my small 15 inches screen.

Because windows are managed the way they are in i3, getting split when multiple windows are in the same workspace and never overlapping, it nurtures the good habit of dividing workspaces appropriately to maximize the space that each application occupies, which is done with keyboard shortcuts. With (customizable) shortcuts, you can split windows, move them to other workspaces, change workspaces, open applications automatically in specific workspaces, etc. Using exclusively the keyboard to manage the windows becomes a huge time saver, and even more so when considering the very small footprint required to use the window manager, making for a lightning fast experience.

Once you get past the initial lack of visual appeal and weird way to move around, you can actually customize many aspects of i3, including fonts, mouse bindings, window border decorations, colors, automatic execution of apps when initiating a session, etc.

Why is it so fast to customize? Because the configuration is all contained in one simple text file and you can make a change and reload the window manager on the fly to see your changes being reflected. Setting the number of workspaces is as easy as adding or removing a line (well, as a bare minimum, otherwise it’s useful to also bind certain keyboard shortcuts to move to those newly created workspaces). Setting a wallpaper is one line, setting a screen lock is another one. Quick and efficient.

Easy to switch layouts and focus

I actually enjoy the default layout quite a lot, in which there exists no overlap between windows (they split as needed) and all windows are visible at the same time in each workspace. If you need to make more space for a window, you can either “focus” on the current window, which will make it full screen and cover every pixel of the screen, or you can move particular windows to other workspaces. This last option will automatically resize windows so that they occupy the maximum space available.

Besides the default layout, you can also stack and tab windows, depending on how you like to work (it is well worth having a look at the i3 user’s guide to see the many other features available). Personally, I prefer seeing everything at once and dividing my work into many workspaces. If you are curious, here is how I currently have my workspaces set up:

Only workspaces that contain windows will appear on the screen at any given time and are automatically created when you access and use them.

Here is a screenshot* of the workspace where this article is being written (click to open): 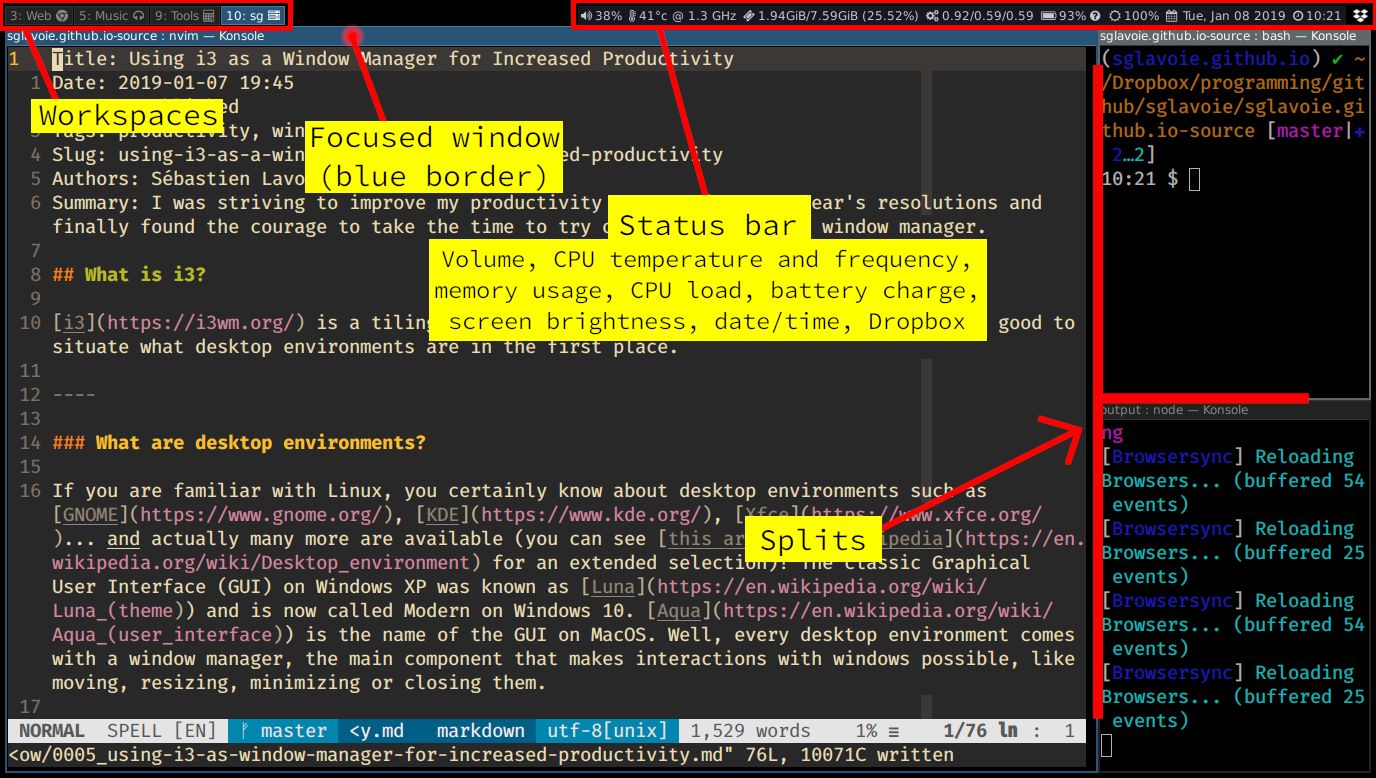 * In this particular scenario, the splits on the right side are intentionally very small as I do not need to read the output, but need quick access to a terminal to enter commands. Moving back and forth between windows is a breeze, so that’s how I currently handle the situation.

Note: With Neovim, there is an embedded terminal, which makes things very easy to handle by avoiding splits altogether. In that case, it is also possible to divide a workflow with tabs inside Neovim instead of physically splitting windows.

Alternatively, instead of splitting windows, a more convenient solution on smaller screens might be to use stacking windows with the shortcut $mod + s in each workspace or, to provide that behavior by default, the following can be added to i3’s configuration file (defaults in ~/.config/i3/config):

I am not trying to convince myself anymore: I really prefer this workflow! If you are looking for a change and would like to maximize both your productivity and your system resources, i3 is a great window manager to consider. It doesn’t seem very intuitive at first, but I swear it quickly becomes easy to use and you also end up learning more about how Linux works and set things up manually (just once!) to your likings. For example, I use Rofi instead of dmenu to have a window pop-up to select applications or switch to any window on any workspace… which was only one line to modify in the configuration file.

I have found the following screencasts on YouTube to be quite useful in learning how to configure i3 (apart from the official documentation which is very comprehensive):